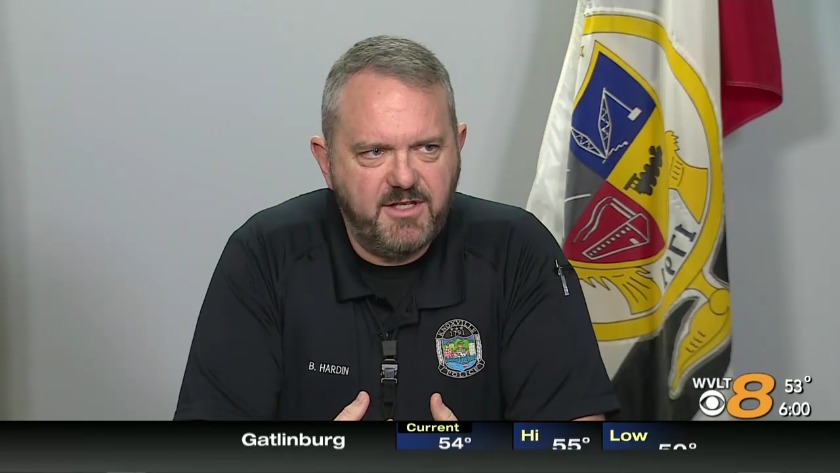 Officer B.K. Hardin speaking for the 1st time after attack

KNOXVILLE, Tenn. (WVLT) -- The Knoxville Police Department made an announcement this morning at 10:30 concerning the reward fund in connection to the attack on Officer Hardin.

Officer B.K. Hardin spoke to the media this morning after the reward announcement at the Knoxville Police Safety Building.

Officer Hardin was directing post-game traffic on the evening of Nov. 17th at the intersection of 17th Street and Clinch Avenue when a male suspect ran up from behind and struck him with a hammer or tire iron. The suspect fled west on Clinch Avenue from 17th Street.

On Friday, Hardin spoke publicly for the first time since the attack.

He began with thanking the media and the community: "The community outreach and people's prayers and thoughts and well wishes have just been overwhelming, as you can imagine."

This is "unprecedented," Hardin said at the conference. "We've done our background and tried to look to see if an officer has ever been just truly ambushed while on duty, and, to the best of our knowledge, this is the first."

Letting people take care of him has been "a little difficult," Hardin said. According to the officer, he was unable to drive for over 2 and a half weeks.

As of now, he has been back at work doing a few "light duty" activities. He suffered from a concussion and bleeding on the brain.

"The world started spinning," he said when remembering the attack, "And that's when it stopped. I went from stopping a few cars and making sure no one was crossing the street to stay up, figure out what going on."

Witnesses described the suspect as a man believed to be in his mid-20s, clean shaven, approximately 6 feet tall and weighing about 160 pounds. The suspect is believed to have been wearing a charcoal gray or faded black hoodie and light gray pants.

The reward fund is now $23,400 for information leading to the arrest and conviction of the person who attacked Knoxville Police Department Officer B.K. Hardin as he was directing traffic following the Nov. 17 University of Tennessee football game.

“Officer Hardin was struck in the head from behind with a blunt object, and his injury required immediate emergency surgery,” Mayor Madeline Rogero said. “It was a horrendous, unprovoked attack. We hope the reward encourages witnesses to come forward. Thankfully, Officer Hardin is recovering and is expected to be able to return to duty by early next year.”

Investigators are still seeking witnesses to the attack or anyone who may have seen a person in the area carrying a hammer, tire iron or similar object. If you have information, please call the Knoxville Police Department’s crime information line at 865-215-7212. Callers can remain anonymous. Tips can also be submitted through the Police Department’s Facebook page – @KnoxvillePD.

You can watch the full conference with Hardin below.