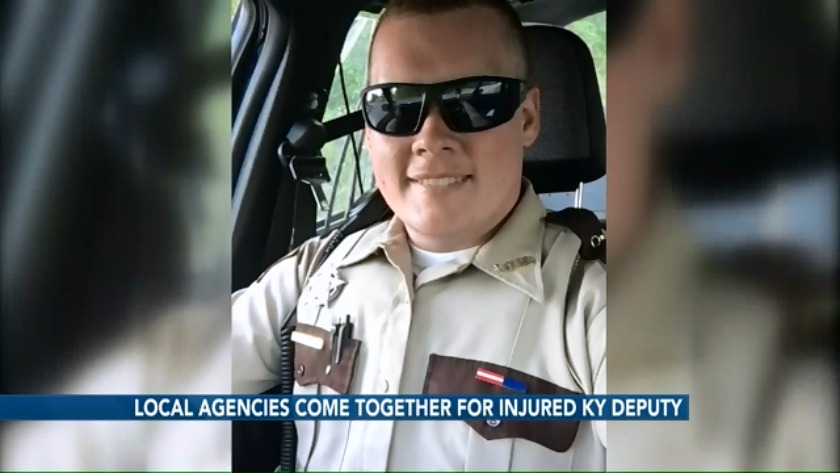 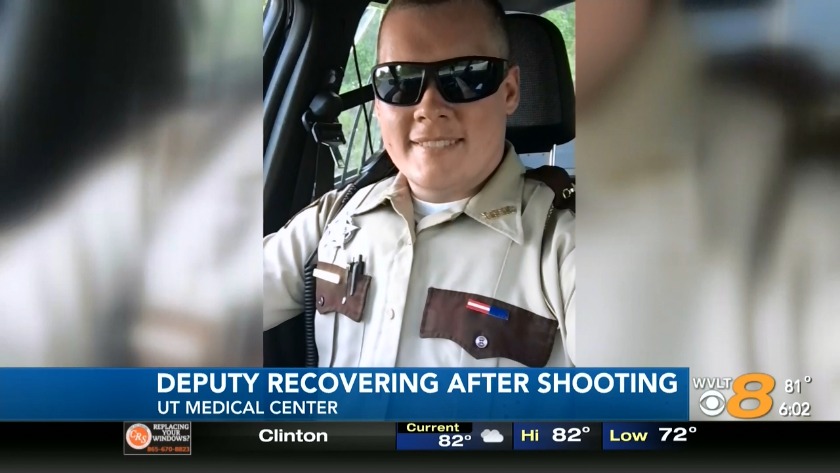 McCREARY COUNTY, Ky. (WKYT / WVLT) - According to a new report, an injured McCreary County, Kentucky deputy was able to return fire as he collapsed on the ground during the shootout that left him in critical condition on July 17.

Deputy Dustin Watkins, 28, was injured in a shooting while on a call. (WKYT)

Police: McCreary Co deputy was able to return fire while collapsing to the ground next to his crusader when being shot. More on the preliminary hearing testimony later @WKYT @WYMT @wvlt pic.twitter.com/uyn2GfALAV

WKYT reported that the deputy, identified as 28-year-old Tyler Watkins, was doing much better and ate his first meal on Wednesday night at the University of Tennessee Medical Center.

The hospital said he was in stable condition.

Tyler released a statement on Monday saying, "My family and I are very thankful for the overwhelming outpouring of support we have received since the shooting. I hope to be able to personally thank each and every one when I am able to do so.

I would expressly like to thank and recognize those agencies that helped me and my family during this time: McCreary County 911, McCreary County Sheriff’s Office, Kentucky State Police, McCreary County EMS, Whitley City Fire Department and Chief Tony Miller, Constable Cody Stephens, PHI, the University of Tennessee medical staff, Supporting Heroes and all the Knox County and Tennessee officers who came by while I was in the hospital.

At this time I am just focusing on resting, recovering and spending time with my family.”

His family released a statement through the hospital saying, "We are overwhelmed by the support for Tyler and our family and loved ones, and we're so appreciative for all of the thoughts and prayers.

We'd like to thank the group Supporting Heroes, the staff at Ut Medical Center, the Knox County Sheriff's Department and all the law enforcement from throughout the area for their support.

It's nice to know when tragedies like this occur, that there are so many people here to give love and comfort, especially considering that we're from out of state."

State police said the officer was called out to Lick Creek Road at 8 p.m. on July 16 and once he got there he was shot.

KSP says the deputy found Mark Dungan, 48, of Science Hill, in a car outside of the home. Troopers say Dungan fired shots at the deputy hitting him.

KSP and McCreary Co. deputies found Dungan in a cemetery and arrested him.

Dungan is being held in the Leslie County Detention Center. He's facing multiple charges including wanton endangerment, resisting arrest and possession of a handgun by a convicted felon.

State police say the constable hit was not injured.

Your Forecast: Enjoy the sunshine while you can

Your Forecast: Enjoy the sunshine while you can