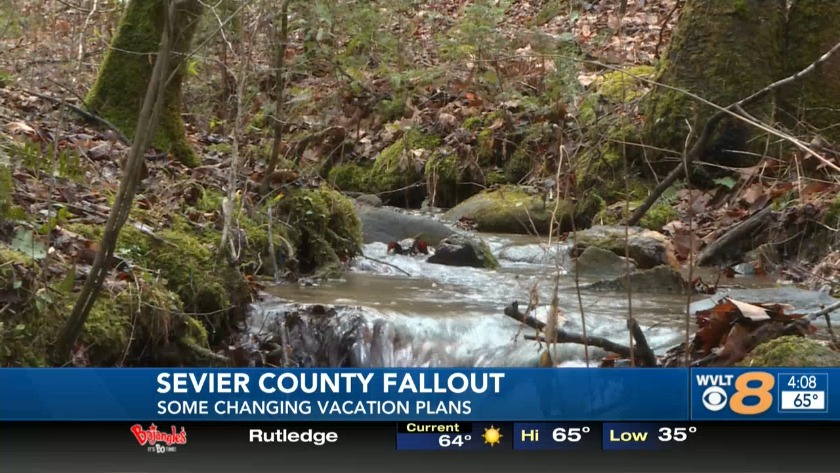 Winterton took to Twitter to express her thoughts on Hurst's comments after waking up and seeing the news Tuesday morning.

“I woke up this morning and saw this video and I was horrified," said Tami Winterton. She is from Franklin, Tennessee. "I got online to make sure this was real and just kept getting upset. By 10 a.m., I was on the phone with my sister and other relatives. It wasn't totally the comments of Hurst, it was the fact that there were children in the audience. It was the fact that one woman walked out. It was the fact that not one of the other Commissioners stood up to this man.

And I hate to sound shallow, but it was also Hurst's grammar. He couldn't even take the toothpick out of his mouth to speak at a public event. That and his use of words embodied the way the western states make fun of the "hillbilly" image and his word sickened me.

My family has interracial marriage. One family member is a lesbian. How could we all travel to Pigeon Forge to attend Thanksgiving with such hate for our family members?"

Winterton said her family is not wealthy and spent a great deal of time and money planning a trip for nearly 29 people to Riverstone Resort to celebrate Thanksgiving. This would be the first time she, and many other family members would visit the area.

The family decided to cancel their trip to Pigeon Forge in light of the comments made by Hurst. Instead, she and her family will travel to Nashville. Winterton did not lose any money due to her decision to cancel the trip. Winterton said it would be wrong to ask her family to pay for a trip to a county where their lifestyle is not approved.

"I would love to see that area, [Pigeon Forge] but not while these men are in office," Winterton said in an exclusive interview with WVLT.

For Winterton, even an apology will not change her feelings about traveling to Pigeon Forge.

"Anyone can apologize," Winterton said. "I don't want to go to a place where there's that much hate."

Winterton moved to Tennessee from Arizona nearly three years ago. She said she was shocked by the views of many people in the south.

"I didn't know white supremacy was even really a thing," Winterton said. "I had no idea how people felt about gay marriage or anything like that until I moved to the south."

Winterton expressed her anger saying she couldn't imagine standing in front of a group of people and making the comments Hurst made.

Winterton said she typically only uses Twitter for sharing animal photos but said she was very upset and had to voice her opinion on the offensive comments. Her comments gained attention with nearly 500 people liking the tweets.

"The response was huge. I kept getting people saying they felt the same way," Winterton said. "I didn't have any kind of backlash from anyone saying you're wrong."

Dozens of others have taken to Twitter to express a similar sentiment using the hashtag #BoytcottSevierCounty.

No more vacations, stopping for gas or a bite to eat in @SevierCounty until Warren Hurst resigns. #BoycottSevierCounty
A Tennessee county official’s ‘queer running for president’ comments draw condemnation https://t.co/88WV9zzART

There are good people in this area who don’t deserve to be represented by inexcusable homophobia and bigotry. Also: there is no way @DollyParton and @Dollywood support this thoughtless rhetoric. Until he’s removed, #BoycottSevierCounty

I know a lot of people who spend a lot of money in @SevierCounty. Until Hurst resigns, we will not spend another penny in this county. This includes renewing @Dollywood passes or visiting @Ripleys attractions. #BoycottSevierCounty #TourismFundsSevierCounty @glaad

Multiple officials and Dollywood have made statements condemning the comments, but there has been no word on any effort to oust Hurst.

A Dollywood spokesperson said, "We read the comments made in Monday night’s County Commission meeting and they do not reflect the Dollywood experience in any way. Dollywood is open and welcoming to everyone, every day."

Hurst himself has been unavailable for comment since the incident.

Pigeon Forge officials tell WVLT news that they are working diligently to respond to each and every call and email to let people know that Hurst's views do not reflect that of the chamber.

Officials called Hurst's choice to express his views like that, "unfortunate."

Winds got up to 95 mph in Cumberland County, report says

Winds got up to 95 mph in Cumberland County, report says