Fans on standby at SEC Tourney 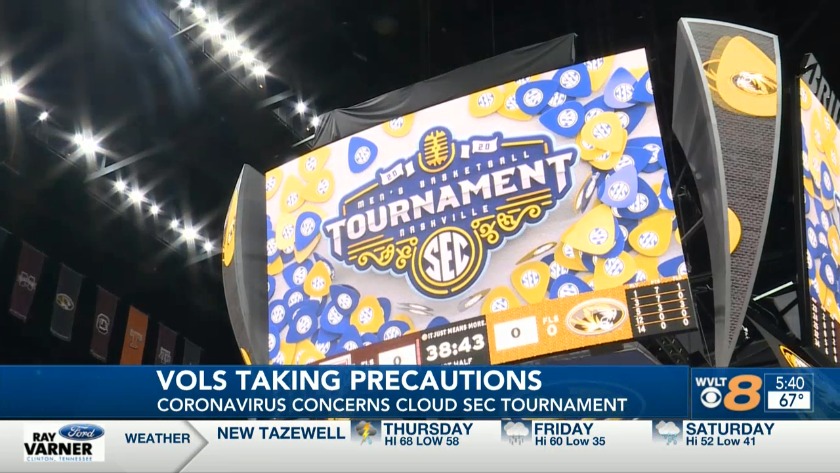 KNOXVILLE, Tenn. (WVLT) -- A sign at the Bridgestone Arena reads, SEC, the only Conference with it's own chant! Well, the chant the league is also repeating this weekend is safety. With the spreading of the Covid-19 virus,
league officials are taking no chances with it's personnel, the teams and the fans--something UT
head coach Rick Barnes is absolutely on board with saying, "We have total confidence in the SEC, we have the best leadership in the country believe me, commissioner Sankey and his team are way ahead of this they're gonna do what's right for the student athletes and the fans, what's right for everybody. We trust them to do that. We're gonna do what we do, I'll tell you I've never seen so much hand sanitizer being passed around, but that's a good thing."

Of course, the coach also has basketball on his mind. His Vols won two of their last three games including a huge
upset of Kentucky. Up next on Thursday, a rematch against an Alabama team the Vols edged 69-68 in Tuscaloosa. The Tide
was minus talented Jr. Forward Herbert Jones in that game. He'll be available here in Nashville but that won't change Tennessee's approach
in trying to turn back the Tide. "I do think that everybody looks at Tournament play this time of year as a chance to start over. You hope your team is in the right mindset. We've had a good end of the season we had two good wins, but we didn't refocus and we talked about that how you can't live off of what you did the other day. Our guys are in the right mindset, we had a good workout the other day and a good one here today so hopefully our guys are eager to play."

With or without fans, the game tips off at 1:00 p.m. We'll keep everyone posted via social media and the wvlt app regarding any possible changes to fan attendance at this weekends games. For those definitely not coming to Nashville, Tennessee and Bama game will be broadcast by the SEC Network.