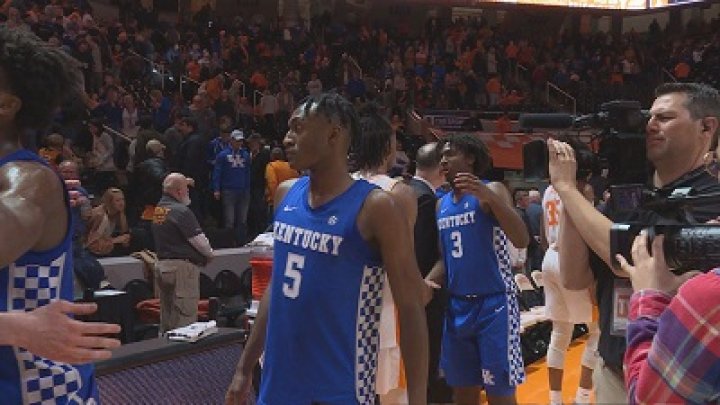 KNOXVILLE, Tenn. (WVLT) -- The Vols got revenge against the Kentucky Wildcats, beating them
81-73 at Rupp Arena on Tuesday night.

Tennessee erased a 17-point deficit to come back and win by 8 points!
It's the first time Kentucky has lost under John Calipari when leading by double-digits at the half. In fact, the Cats were 129-0 over the last 10 seasons when leading by 10 or more points at halftime.

Rick Barnes becomes the first Vols head coach to win twice at Rupp. Vols last won their in 2018. It's UT's 6th all time at Rupp Arena.

Tennessee would get a couple big buckets late from Yves Pons and Josiah James. UT had four players in double figures, but the star of the game was junior John Fulkerson.

The Kingsport native turned in a career night with 27 points on 10 of 15 shooting from the floor. He was a perfect 7 of 7 from the free throw line and also contributed six rebounds. Led by Fulky, the Vols were able to outscore the Wildcats 50-31 in the second half of play on their way to that eight point win. With the victory, the Volunteers improve to 17-13 overall, 9-8 in SEC play.

It's back home Saturday for the Big Orange who host Auburn on Senior Day at Thompson-Boling Arena. Jordan Bowden and Lamonte Turner will be honored on the Summitt floor prior to the Noon tip-off against the Tigers.

Massive win in Lexington! The Vols erase a 17-point deficit tonight, behind a career high 27 pts. from John Fulkerson - beating the Cats 81-73! @wvlt

The Cats were ranked number six, but that will change after losing to the Vols.

Vols John Fulkerson had a career-high against Kentucky with 27 points.